Last time I spoke about the importance of being earnest.

Which was an opportunity for me to talk about the draw of various styles of photography and how there may be a temptation to shoot in a different way in order to please people that aren’t yourself.

If I recall correctly, I think I decided that wasn’t a good idea…. (I’m kidding I know that’s exactly what I decided!)

But that doesn’t mean you have to decide to do everything the same way every time.

So for this instalment we’re going to look at a few images that are unified in subject matter, but I’ve approached the shots in different ways.

Let’s kick off with the images shall we?

I’ll tell you a little about each underneath the relevant shot. 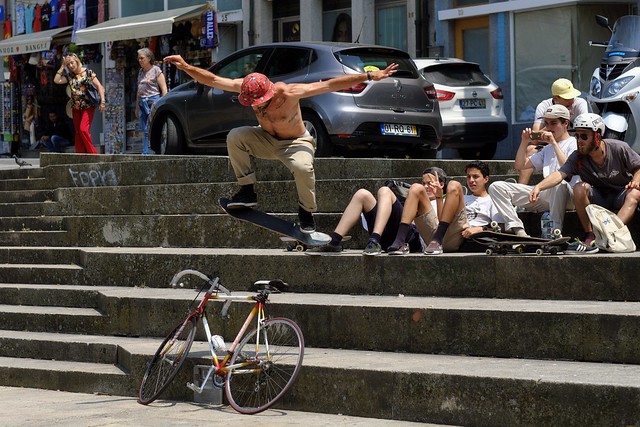 1. Flying High. I saw that this was about to unfold and prepared my camera for it. 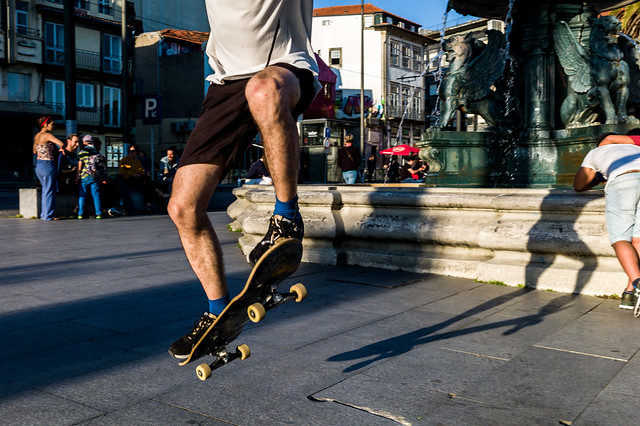 2. Public Display. There was a bunch of skateboarders going at it through a fairly crowded area, so they were moving erratically, and skilfully avoiding everyone, even the idiot with the camera (me) who was trying to get as close to possible to them. I set a zone focus and tried to anticipate where they’d be. I thought this would be a good scene, and I’ll be hand on heart honest here and say I was initially disappointed that he had no head in the shot! 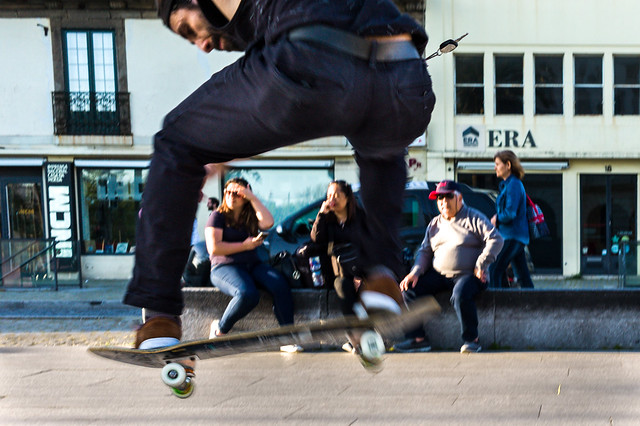 3. High Flying. (Taken same day as shot #2) As above but I made a better job of anticipating where the skater’s head would be and timed it so that we could see people through his legs, also I didn’t focus too much on getting his head in shot at the expense of his feet/skateboard 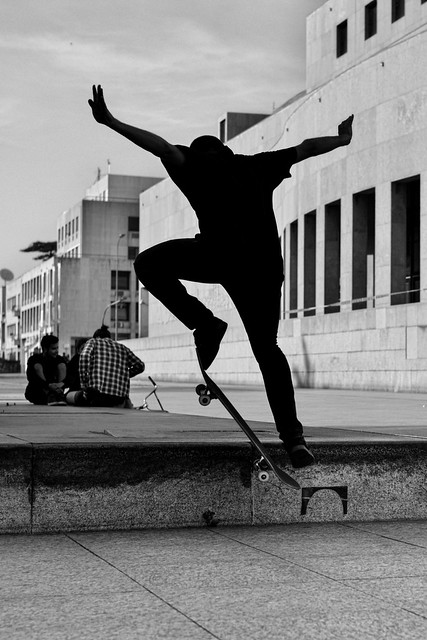 4. Jump. Poised and delicate, this guy was like watching a pro motorsports driver on a racetrack… after a couple of laps you knew exactly where he’d be and the very late afternoon sun gave a strong silhouette 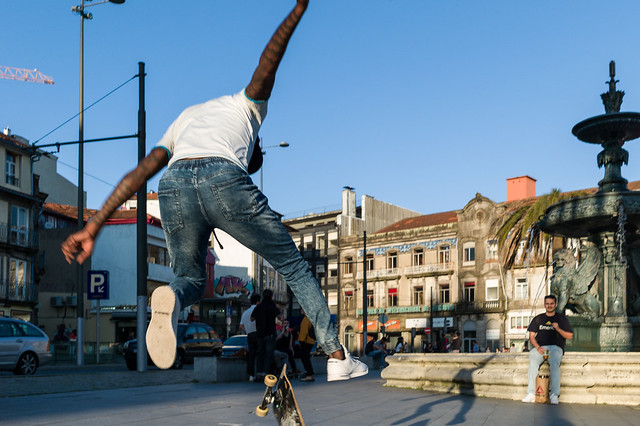 5. Don’t Lose Your Head. (Taken same day as shots #2 & #3) After the headgate of #2 and a bit too much motion blur in #3 I managed to get a complete skater in frame (bar one hand), unblurred and well lit.

So four shots. All (bar a little #2) came out basically as I was expecting.

But which worked the best and why?

You will no doubt have your own ideas and reasons for those opinions.

But here’s mine. Let’s start off with a little overview of each shot as I’ve appraised it. Incidentally numbers 2, 3 & 5 were all shot at the same day and within the same timeframe. 1 and 4 were shot months apart.

#1 is perhaps technically the best shot. The balance of the frame is pretty good, the focus is good. There’s the most story in the image, the group of boarders, the lack of safety gear and the height of the jump.

#2 I’ve been honest with you on this one, I wanted the frame to be a little higher, but the other ingredients are about as I intended, it all comes down to how much the skater needs a head!

#3 There’s motion blur here, but it’s quite interesting I think, I really like his key hanging off his belt. I think you get a sense of it being a live street scene.

#4 It’s acceptably composed I think.. the shape of the skater negates the central framing, his buddies behind on the wall add some context and the silhouette needs no shadow detail as this adds to the visual impact

#5 A close shot, frozen motion and a context background. Just what I set out to get.

But which worked out best?

On #1, don’t get me wrong I’m pleased with the shot, but it’s possibly a little clinical, I had time to take it and I think it shows. It becomes more documentary than street in way..

#4 is a bit of a ‘do well on social media’ type shot (and indeed it did 🙂 ) it looks good as a thumbnail, is a fairly reasonable street capture and there’s nothing to discombobulate the viewer, it shows what it is, shows it pretty well and delivers on the promise of the thumbnail

#3 is a bit of a mixed bag. Technically it’s the weakest IMO, but it’s also the one that IMO most captures the essence of a skateboarder honing through the urban jungle

#2 I blow most hot and cold with… I think the shot might mean different things to different viewers… from a did the camera go off accidentally mate? perspective to a skateboarder photo-bomb or even a snippet of an action scene (it’s GDRP compliant at least 😀 ) – there’s an energy to it, and once our eyes wander round the scene I think we wonder about the figures bent over the fountain and why no one’s paying the skater any attention. Basically I think it’s the shot that most strokes the imagination

It’s important to have a style in your photography, but I don’t think this should preclude you from experimentation.

As an urban/street (or indeed any genre) photographer you’ll find your scenes, but there’s no shame in working your themes

One Reply to “Adam’s Street: Seeing Your Scenes and Working Your Themes”