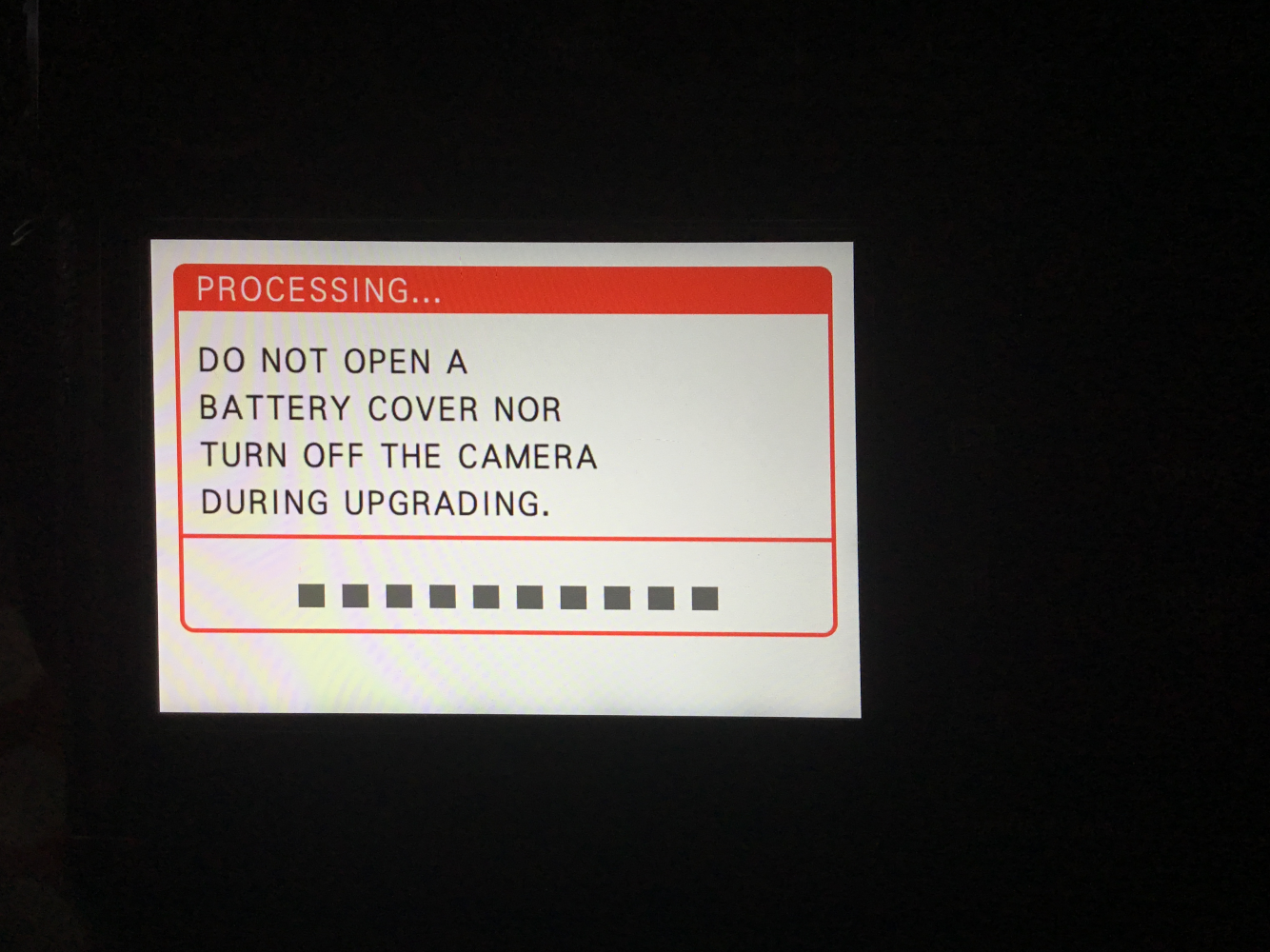 I published this last Sunday as a web page, but I won’t blog this in approx. twenty weeks time as it’ll be out of date by then, so as increasingly I think y’all are following the blog rather than the web pages, you can have an extra post this week 🙂

After the false start of the FW update being delayed we X-Pro2 owners finally received the long promised FW v5.00 last week (that’s July 19th 2018 in case you’re reading this many moons later!)

I fear that I won’t really be able to do this FW update much justice in terms of review, because to be brutally honest… there’s actually not much in there that really rocks my world.

I can’t imagine there’s that many meaningful, feature filled FW updates left for the X-Pro2 as it’s not really a new camera any more and the rumour sites (see Fuji Rumours) are starting to speculate about the next round of X Series cameras, specifically the X-T3.

This means, that for my opinion at least, the last great X-Pro2 FW update speaks more about what we’ve not been given that what we have.

But before I get into that… Let’s be very clear, we’re extremely lucky to get FW updates from Fujifilm.

They really don’t have to give us stuff for free.

I’ve heard both sides of the debate (more than once 😉 )

Wow Fujifilm really spoil us with their FW updates, amazing that they do this it’s so generous

Fujifilm are only giving us features that all the cameras have anyway, but Fujifilm like us to think it’s a present, but the reality is that all they’re doing is correcting omissions

And y’know? I can see both sides.

It is nice to get something for nothing.

Maybe Fujifilm do hold back some features for the cachet of gift giving further down the line.

But when all’s said and done…. We owe it to ourselves to know what we’re buying. You wouldn’t buy a car then find out it doesn’t have aircon, if aircon is very high up on your list of things a car should have. Would you?

And similarly, when we go into a camera store to make a purchase we really ought to know what it is we’re buying. If the Fujifilm camera doesn’t have feature ABC and feature ABC is important to you, then don’t buy the Fujifilm 🙂 If feature ABC later becomes available (via FW update) then rejoice.

But understand that the original absence of feature ABC doesn’t mean you have an entitlement to receive it.

So with that out of the way…

For my opinion, the series of X-Pro2 FW updates have in many instances been about harmonising the features of the X-Pro2 with the X-T2. No drama about that…

….but some things that X-Pro2 owners have been clamouring for are looking like they’ll never arrive. I mean we each have our own personal wish list for our cameras, personally I’d like thicker framelines and the ability to brighten them.

But a great many people have asked Fujifilm for a way to assign the ISO to a scroll wheel and to be free of the ‘lift-and-turn’ physical ISO dial.

This feature is not included in the latest update. I stand by what I said a few paragraphs back…. don’t like a missing feature? Then buy a different camera, but I’m still surprised that a feature that’s available on the X100F and X-T2 isn’t on the X-Pro2, despite this feature being requested so frequently and so vocally.

So let’s move on to what we do have.

1. Enlarged and customizable indicators or information
The upgrade allows users to enlarge indicators and information in the viewfinder and/or LCD monitor. This upgrade will also enable users to customize the location of where the information is shown on the display.

2. Addition of “Flicker Reduction”
For enhancing the quality of indoor sports photography, the upgrade allows users to reduce flicker in pictures and the display when shooting under fluorescent lighting and other similar light sources.

4. Enhanced Phase Detection AF
Latest updates to the AF algorithm provide the following performance enhancements
1) The low-light limit for phase detection autofocus has been improved by approximately 1.5 stops from 0.5EV to -1.0EV, raising the precision and speed of autofocus in low-light environments.
2) The range at minimum aperture has been expanded from F8 to F11. For example, even when using the XF100-400mmF4.5-5.6 R LM OIS WR with the tele converter XF2X TC WR, phase detection autofocus can now be used.
3) Major improvements have been made to the AF-C performance while operating the zoom, which provides major benefits when shooting sports and other scenarios in which the subjects moves unpredictably.
4) Finely-detailed surface textures of wild birds and wild animals can now be captured at high speed and with high precision as a result of improvement in phase detection autofocus.

So let’s review these one-by-one, starting with number two!

Enabling this feature “reduces” flicker when shooting under fluorescent light sources. There’s no such thing as a free lunch though and the cost of this little morsel is an electronic shutter that won’t fire (if flicker resolution is enabled) and a increased time to capture images

I haven’t played with this. It enables you to create custom folders and folder names and then select which of your folders you wish to store images in. This could potentially be very handy for the professional event photographer (eg imagine folders with names like Church/Ceremony/Dinner/Party) or for the travel photographer (Rome/Venice/Milan)

The full details of this are in the copy/paste above. I’m not really an AF guy, I might never notice this (and I didn’t realise that at very tight apertures PDAF pixels were not deployed) If all of these AF improvements (particularly the line, improved by approximately 1.5 stops from 0.5EV to -1.0EV) are indeed as described (and why wouldn’t they be) this should make many people very happy. I’m largely ambivalent to AF, I don’t own any of the fast AF lenses, so this update is a bit wasted on me, but I suspect it’s the star of the show for most people

5. New functions are added to store and read of camera settings by FUJIFILM X Acquire.

1. Enlarged and customizable indicators or information

Ok this is the one that I was quite excited about, I’ve always found the X-Pro2 OVF (and to a lesser extent the EVF) to be far less legible than the X-Pro1 and hopefully this was the resolution that I was looking for (half pun half intended).

So let’s take a look.

Here’s the original OVF view with the standard sized icons

Here’s the NEW OVF view with the enlarged sized icons

What do we think? (I appreciate that it can be customised to display other icons)

For me I’m not liking the loss of the distance scale, I use that! Also my dream of thicker framelines hasn’t materialised.

One thing I do like is that you can have the EVF/LCD set to the standard (or enlarged) icons and the OVF to the enlarged (or standard) icons.

So I’ll probably set mine so that the OVF has very few, but very legible icons and the EVF has everything that I need in the smaller size (as I tend to affirm focus and framing in the EVF, then switch to the OVF for the shot) Update: No this doesn’t work, setting large icons in one becomes the default setting in the other.

So for me…. not without charm but in my humblest… a slightly raggedy implementation…. with icons breaking the boarders of the framelines and the ISO/Metering/DR/Film Sim/Shutter Type icons looking rather like they’ve been haphazardly sprinkled into the OVF from afar.

But it is what it is and I think we can only say thank you to Fujifilm for continuing to provide updates to cameras that are approaching end of life.

Right!! I’ve two hours to myself before I collect my daughter from school, I suppose I’d better go check the camera still works after updating the FW this morning!