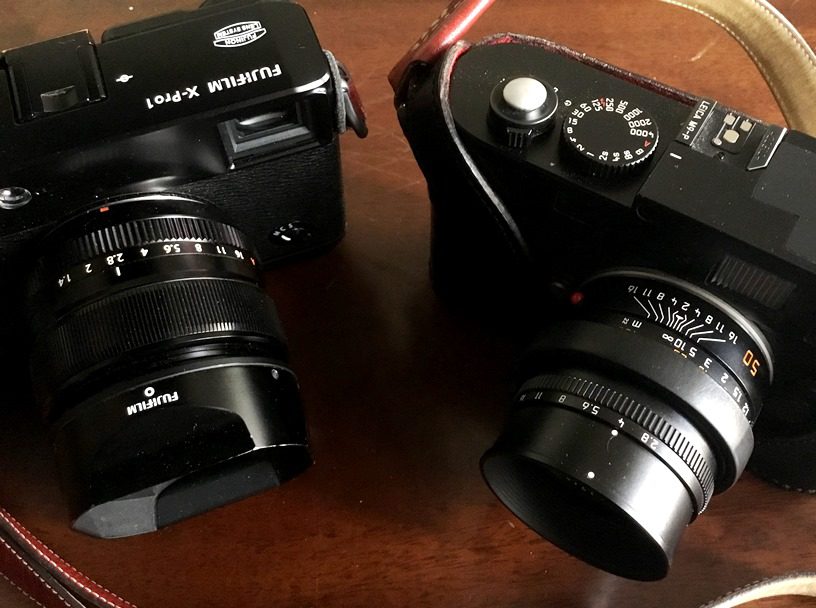 Part 115: Lunchtime Legends: A Bit of Fun with the X-Pro1 and Leica M9

Let me start off by making something very clear – this is JUST A BIT OF FUN – I’m not looking to make any deep and meaningful comparisons. I’ll drop a few brief notes further down the page, but this is just a playful look at some pictures

Maybe. Digital products are fairly transient, I don’t just mean that every two or three years or so that a new version of a particular model comes out (because you don’t have to upgrade), I mean that batteries become unavailable, lead free solder life expectancy is not limitless and electrical components perish.

Truly legendary film cameras have the capacity to run and run… digital ones, well I’m not so convinced.

But that doesn’t stop people using the word ‘legendary’

Well I think, for my OPINION, it has to be the look to the images.

Both of these models have been superseded by newer and better models (the imaginatively named X-Pro2 and M10 for example) but they each still have a fan base and each has a number of followers stating that in their opinion, the later versions never bettered the original in terms of look and feel from the images.

This article is just a bit of fun. It’s NOT a review (I’ve reviewed the X-Pro1 “quite” extensively already 🙂 and there’s many Leica blogs about the M9 out there)

This article is just a bit of fun. It’s NOT a comparison of “which camera makes the nicest images” (that’s largely subjective in terms of image look and feel, and in terms of capturing images the Fujifilm gives you more ISO, more DR and more tools to meter and ensure focus)

No, this article is just a bit of fun. Once hot, perhaps now merely tepid… two cameras linked only by the fact they have a big following, aren’t in production anymore and cost second hand a fraction of what they cost new (especially in the case of the X-Pro1 – but it’s funny maths no? The Fuji is many percent cheaper second hand than it cost new, but the Leica represents a far bigger drop in hard cash between the cost when it was new and the second hand value)

Now before I get into this… Let’s have a brief chat about each camera, and I mean brief.

The Leica feels better made mechanically, the Fuji feels more robust in terms of its operating system (software).

Both cameras are quite fiddly by modern standards, each requiring a combination of buttons on both the left and right hand side of the body. (For example, on the M9 you have to PRESS AND HOLD down the ISO button on the left, whilst simultaneously navigating to the desired ISO setting with the D pad or scroll wheel on the right) The Leica has 1/2 stops on the SS dial and aperture ring, but no way to set 1/3 stops (bar the EV wheel, that’s either menu based or can be blindly set with the scroll wheel), the Fuji needs the D pad for 1/3 SS stops, but does offer 1/3 stops on the lens.

In short, neither camera is very modern and both feel old compared to something like an X-Pro2 (than can be used one handed to set pretty much anything) or X-T2 that has many dedicated dials

I used the legendary (and truly I mean truly legendary, it’s been around and in production for decades) 50mm Summicron on the Leica, and the superb XF35 F1.4 on the X-Pro1.

The 35mm on APSC and 50mm on FF gives approximately the same FOV between each camera and I harmonised the apparent DOF by using a stop wider aperture setting on the Fuji.

This is NOT some clinical test (I think DPR has their studio scene for each camera if you care about that) I didn’t ensure that each camera shared ISO or SS or whatever.

Before anyone chimes in with, so what a completely meaningless test I reiterate again, THIS ISN’T A TEST IT’S A BIT OF FUN

Or put another way… I went out with a camera (ok with two cameras), shot some snaps in aperture priority mode and came home and edited the pictures in the raw converters that I own and personally feel work best with that (well each) camera.

A test that is not, but it’s quite real world I think…

So shall we see some pictures? (clicking on them should open them in a new tab so you can zoom in, each is 2048px long edge)

For these images I looked for things that had colour and texture.

Leica M9 (No, I wasn’t abe to entice the cat to look at the camera second time round!)

The X-Pro1 images are all in Astia, the Leica ones are all in Adobe standard. Like I said, I worked on these as I normally would, using the settings and way of editing that I usually do

For me it’s win some/lose some for each camera. YMMV

Does either camera truly have a magical, organic, filmic, wonderful look, yet to be surpassed by the modern technology of mankind? 🙂 🙂 🙂

We can see some clear differences in the colour pallets of each… perhaps we need a little more willing suspension of disbelief on some the Leica sky colours, perhaps the X-Pro1 makes things look a little more shiny than they really are.

And perhaps this is where legends are formed… each camera does appear to making a creative choice on our behalf or have a limitation in regards to the rendering, and if we feel that choice or limitation warms our soul then we see magic.

But really it all comes down to viewer discretion

3 Replies to “Lunchtime Legends: A Bit of Fun with the X-Pro1 and Leica M9”