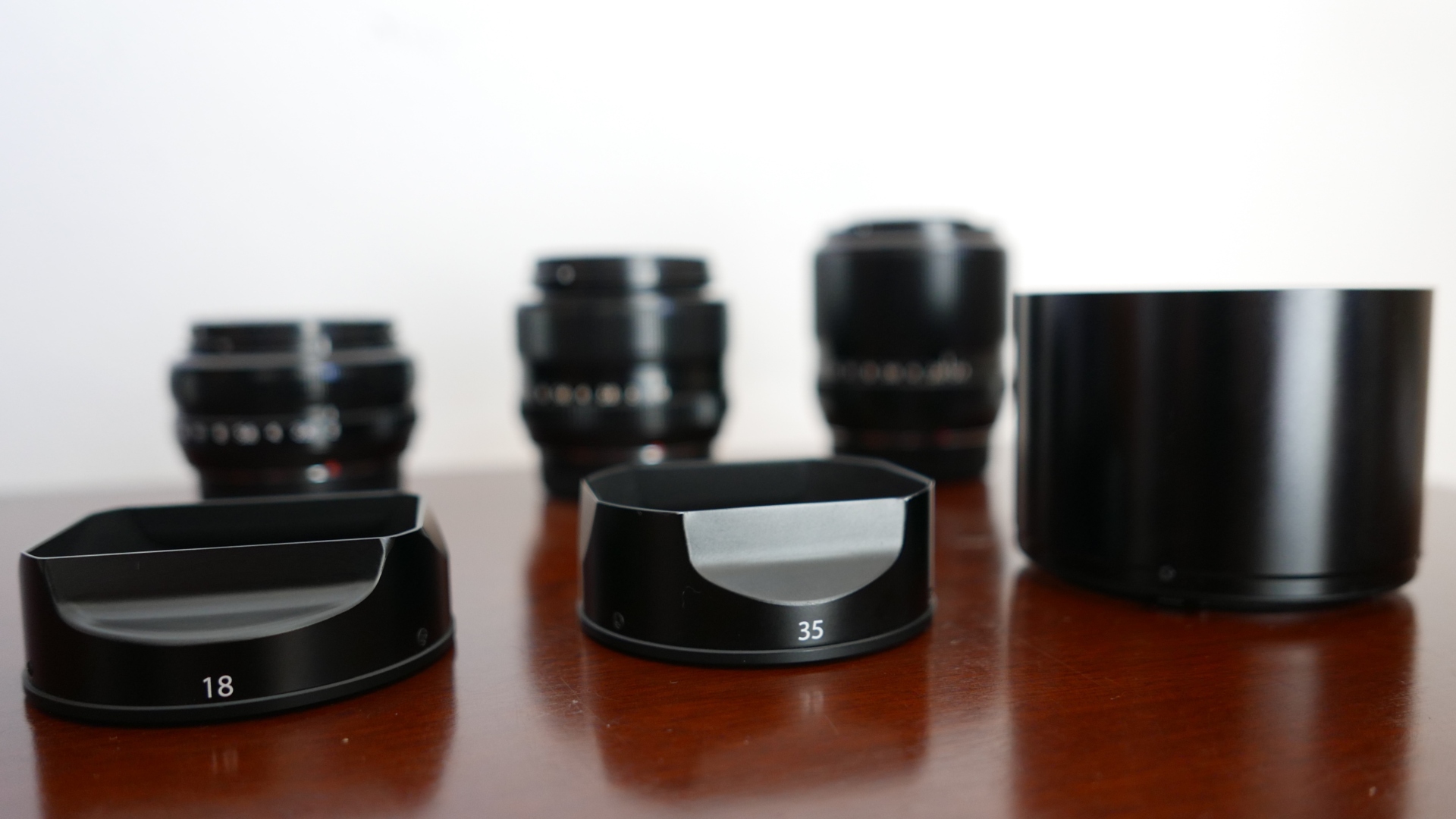 Accessories – just pimping the ride or must haves?

These days’ cameras can be customised in many ways. This customisation begins very much with the software of the camera itself, what functions you assign to user configurable buttons, what changes you might want to make to the camera’s jpeg output, some cameras also allow you to determine what items appear in the quick access menus.

Camera manufacturers are making it increasingly easier to set your camera body up in a way that’s tailored to your own needs.

But there are other physical customisations available that you can purchase in order to get your camera to look or feel how you want it to.

Let’s take a look at some of the accessories that are available and whether or not they’re actually worth getting.

We’ll start off with some very obvious item(s), that I’m sure you’ll agree are absolute must haves.

Yup, you’ll need at least one lens with your camera, and if you’re buying body only, then you’ll have to select which lens(es) you want.

The X-Pro1 was designed around these 3 original lenses; they were (to the best of my knowledge) always destined for each other… Think salt and vinegar or Lennon and McCartney!

My absolute go too lens is the XF35. Physically small and light weight, it’s a fast prime (F1.4) that comes in at a FF equivalent of about 50mm (give or take). 50mm is one of the most popular focal lengths in the world, much is written about why, it’s a bit of a Goldilocks length – not too tele and not to wide. Some say that 50mm is also about the focal length of the human eye and presents the world as we’re using to seeing it (others say that would be closer to 40mm).

For me? Well back when I was 15 (which was quite a while ago, back in the 1980s) my Dad lent me his Pentax K1000 and 50mm (both of which I still have) and my interest in photography was taken to a new level. (Previously I’d been running about with one of those disc film cameras, if you remember them?!) So for me at least, 50mm has been for a while, how I’m used to seeing the world through a view finder.

The XF35 is to me, an instant classic. A great lens that’s optically correct, in that it requires no in built (or external) software processing to achieve a correct image and produces wonderful rendering.

There’s a newer XF35 (a F2) which has the advantages of weather sealing and quicker/quieter AF motors, and it’s a tad cheaper. It requires software correction to produce an non-distorted image and is a stop slower. (This software correction is handled in camera, and by the majority of RAW post processing software)

The XF18 was Fujifilm’s original wide angle option. This lens is very small and even lighter than the 35! It requires software correction to produce an acceptable image and is a stop slower than the 35, opening ‘only’ to F2.

The 18 is quite frequently criticised. Largely because the 18-55 is sharper at the corners (@18). But the 18 is still in my opinion a good lens. For serious landscapers and architecture shots, I’d be the first to suggest a different lens from the Fujifilm line up, the 14 or the 16 or the 10-24.

But the XF18 is of course not without charm and merit! It’s able to focus at a short distance, and was the fastest focusing lens of the original 3. For reportage, street and documentary it’s a very good choice.

The final lens of the original trio is of course the XF60. Which just possibly might be the most despised lens in the whole XF line up! Designed as a middle length tele lens, the XF60 comes up at a FF equivalent of 90mm. The reason the 60 is not highly regarded is two-fold. The AF speed is positively glacial and the later 56mm is faster, both in terms of maximum aperture and AF. The 60 ends up looking like a bit of a relic in comparison.

But of course, this is Fujifilm – there are no bad lenses, just some that are better than others, and the 60 does at least have a party trick up its sleeve – it’s also a 1:2 Macro, the 60 is also very, very sharp and delivers lovely out of focus rendering.

Now I cannot stress strongly enough, I don’t doubt for a millisecond that the XF 16/23/56 primes are in many ways superior to the inaugural 18/35/60.

But the original 3 primes do have in my view some notable advantages over their newer brethren.

Price: They were cheaper than the later lenses when they were launched, and this obviously spills over into the second hand market. In fact I would GUESS that you could probably pick up all three from ebay/craiglist (whatever) for less than the 56 costs new, and probably any 2 (of the original 3) for less than the 56 goes for second hand. That’s a significant saving in my book.

The original 3 also came with metal hoods, these hoods are nicely made and are there waiting for you in the box… no buying a metal hood as an additional accessory on these! The hoods on the original 3 all fit each other too, which can be handy.

3 Lenses. 3 metal hoods. These are all interchangeable to one another. Which can be handy when you’re traveling light – just take the 35mm one.

But in my view, by FAR the biggest draw to the original 3 primes is the size. Compared to the later lenses they’re positively tiny. Seriously, stick one on the camera and the other 2 in your coat pocket (wrap them up in those supplied little pouches first though!) They to me at least, epitomise what the X-Pro1 is all about, a small and light SYSTEM.

The 3 origina primes aren’t in real terms much bigger than a Ray Ban case. The battery on the right is a AA

There are many ways to look at many products, for example the phrase ‘total cost of ownership’ denotes the sum of the purchase price and running costs on things like vehicles. In a time when mirrorless cameras are championed for their size and weight, over incumbent DSLR solutions, I would suggest to anyone concerned about size and weight to look at the total volume of their camera package, not just the specs of the body. After all, buying the smallest camera you can is rather negated if you then end up sticking a 700 gram lens monster on the front of it.

Yes, you’ll need a lens with your X-Pro1 – and you could do so, SO much worse than those original 3 primes.

The X-Pro1 also has a leather case and the original hand grip.

In my opinion, these products are both superb and perfectly fit with the X-Pro1. Namely each is a bit limiting if you’re in a hurry, but if you’re prepared to take your time, and accept that they need removing to access anything and that removing them is s-l-o-w then the quality is excellent.

The grip may not have Arca Swiss dovetails and a hole for the battery/card door, the case doesn’t have that handy battery access flap of the later X100 case, but… so what?!

It adds approx. 8mm in height, and as Lord Flashheart said “Give me something to hang on too”

The case is in my opinion, very well executed, the folding down front flap has so far managed to stay attached on its poppers, even when left dangling for long periods of time (unlike my X100S case that I managed to lose the top part from). The case works great with the XF18/27/35 lenses, It won’t quite close properly with the XF60. But it’s enough, it’ll still offer the body/lens some protection.

The case has an ace up its sleeve – the strap it’s supplied with is so very much nicer than the one you’ll get in the box with any Fuji X camera. I recently saw that Amazon was selling the case/strap for £30. Frankly the strap alone is worth that (when compared to what people charge for designer artisan straps)

The case also comes with a little lens hood pouch (designed to fit the hood from the XF35). It’s got a little popper clip to attach to the strap for carrying around. Personally I think this is asking to lose it… Stick it in your pocket instead. The little pouch can also be used to carry a spare battery, a SD card and the lens cap will fit in there too. Even more reason not to risk losing it by trusting that it’ll stay attached to the case strap, that’s quite an expensive shopping list!

You’ll be surprised just how many little handy things you can get in this space.

The grip truly looks like it is part of the camera; it simply improves the ergonomics, immensely.
The X-Pro1, the original primes, the original accessories even have a level of luxury packaging not found on the later bodies and lenses.

For those of you buying a X-Pro1 in lieu of a Leica M, then the Fuji X-Pro1 grip can even aid in that experience, as just like the Leica you’ll need to unscrew it and stick it in your mouth while you fumble about changing the battery or SD card!!!!!!!!!!!

Unscrew this to remove the grip.

So, in summary, the official Fujifilm accessories are must haves [especially the lenses!] they add to the camera, and they enrich the overall ownership experience.

Next time we’ll look at accessories that are not manufactured by Fujifilm.