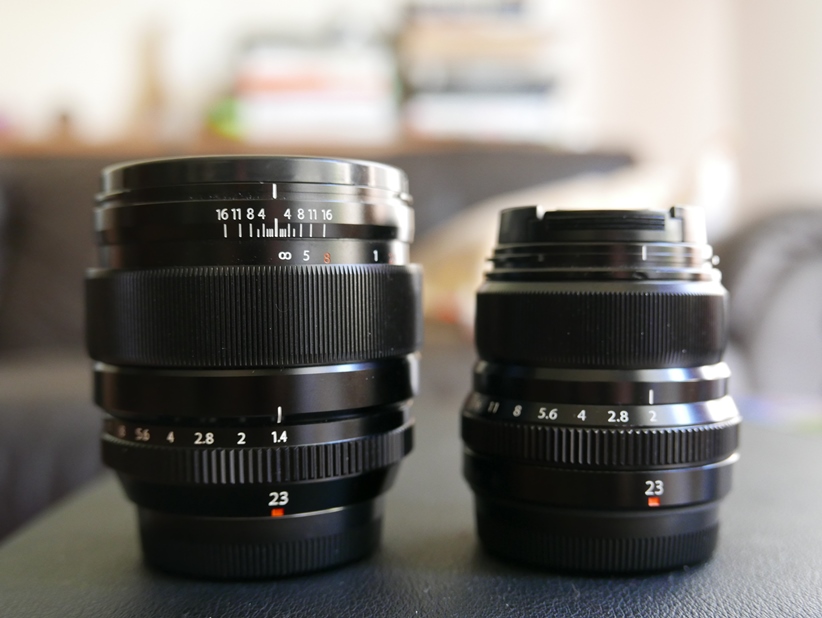 Last week (click here if you missed it) I showed you how both XF23s rendered and produced images that looked different.

This week we’ll continue that theme.

Let’s take a look at another contrast/colour variance example

And again we see that the F2 renders darker, which gives us a different colour signature and more contrast!

As I mentioned before, this difference in colour is because the F2 renders darker, if we leave the camera to decide it’s own exposure in A mode (which I did for the test shots of the doll and the shot where I compared how much wider the 23/F2 was in parts ONE and TWO of this comparison) then the camera compensates for this exposure variation.

But I also wanted to show how each lens performed with the same camera settings as I think this is valid. I’ll talk about the implications of the difference in maximum aperture further down this page, but I feel it’s very important to note that even at the same aperture settings, the 23/F2 produces a darker image, that will require a longer shutter speed or higher ISO to compensate for. The relevance to your shot, will vary shot by shot. But if you’re already at a high ISO or a slow shutter speed, the impact of this will be more important.

But how can this be? F2 is F2 is F2, right? Well no, calculating aperture (in camera lenses) is way beyond my school boy maths grade 🙂 however in a hideous over simplification I’ll describe the physical aperture size as a ratio of other factors about the lens.

But what is also often overlooked, is that the very light transmissivity of the glass itself is a factor. In basic terms sunglasses have less light transmissivity than reading glasses. Glass generally isn’t 100% transparent, nor does all glass share the same transparency. So when lenses, such as the two 23s sport a different number of elements, that are different to one another, with different coatings – they are unlikely to share the exact amount of transmissivity.

Let’s take a closer look at how each lens is using the light, we can see this quite clearly when we take a look at the histogram for each image

You can really see the differences in the amount of green and red at the brighter end of curve in both the actual shots (the red overlaps green to make yellow in the images) and the corresponding histograms.

So let’s review your questions:

1. Are they both the same focal length, because some say they aren’t?
2.  Is the F2 lens softer?
3. Is there any colour/contrast/rendering differences between them?

So this is the part where I tell you all how much better the F1.4 is, and I’m so glad that I chose that variant for my own kit.

You see in most of the areas where the F1.4 holds a clear advantage; namely more organic looking contrast, micro details at pixel peeping levels and light ingress, the F2 can be tweaked to taste in post.

Too much contrast? Lower it a bit in post then.

However the areas in which the F1.4 is at distinct disadvantage, physical size, cost and OVF blockage – you can’t do anything about.

And this is before we mention just how fast the XF23 F2 acquires focus, which in plentiful light is staggeringly fast. The 23 F1.4 is not slow, but in many ways the XF23 F2 is PERHAPS the Fujifilm AF lens by which other XF lenses should be judged

In short there’s an awful lot to recommend the XF23 F2. The areas where you can see why it’s cheaper (light ingress, vignetting, less sharp) are either fixed by in-camera software or can be resolved in post, and the areas it shines at (build quality, size, price and speed) are all welcome features with real, tangible benefits to photographers.

But let’s not write the F1.4 off. Because no matter what it’s compared too, it’s a special piece of glass that can be that distortion free, have that little vignetting and have that fast of an aperture and all for under £800

You may very well be able to edit your F2 images to taste, correct the exposure and turn down contrast where needed, but there’s a satisfaction from owning an optic that does this natively.

A little like how I prefer my favoured recording artists not to have to rely on autotune in the studio, I personally get a sense of pride of ownership from glass that’s naturally in tune (sic)

To my eye and for my tastes (so YMMV) the XF23 F1.4 has that lovely rendering style that got me into Fuji in the first place, whereas the XF23 F2 has a more “common digital camera” look to its images.

Let’s not be too hasty to overlook the extra stop of light that the F1.4 gives us either (which in reality will be a little more than a stop as the F2 exposes darker even with the same SS/Aperture settings)

“Oh it’s only a stop – I don’t care” is a sentiment often expressed on the forums and FB groups when the subject comes up.

But a stop of light is a little like toilet paper – apparently plentiful and far from your list of wants, until such time as you desperately need it and it’s not available 🙂

In professional motorsport it can easily cost an extra £100,000 to go 1/50th of a second per lap quicker and much like a race car the extra cost of the F1.4 is a big ask for what you’re actually getting.

But value for money aside, the F1.4 is the faster race car – it’s a superior optical product, able to produce images with more character (subjective) in less light (fact)

I think if you’re a plentiful light shooter, or an OVF at all times shooter or an F8 and be there type of photographer; if you spend a great deal of time outdoors in damp or dusty places, if superlative AF speed is very important to you, if you tend to whack the contrast up the moment you import an image into your editing software – then the F1.4 makes very little sense for you in practical terms.

But for low light and for that extra bit of image rendering sophistication which in my OPINION the F2 can’t quite match the F1.4 – if those things appeal, and if the extra cost isn’t prohibitive to you – then you’ll have your choice made.