This is the concluding part of my series on the XF56 F1.2R APD. If you missed any, click the links for:

The 56 APD is often thought of as ‘the’ portrait lens.

But I wanted to see if it could play a double role.

I wanted, well needed, to see if this lens could add that highly subjective je ne sais quoi to the shots that I like to take.

Would the APD “”merely”” cripple AF and smooth away bokeh balls and OOF areas, or would it add a creamy dreamy blur of contrast?

Let’s take a look at some of my favourite 56 APD shots from my time with the lens. 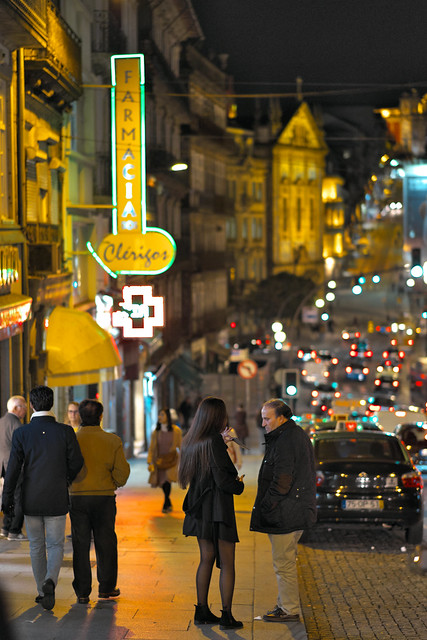 Last time out, I spoke about how I enjoyed using the 56 APD at night. And this shot is one that I think very much shows how the longer focal length (normally I use the XF35) works for street – it enables you to hang back a bit and observe slightly from afar. It was a challenging scene, with a big spread of dynamic range and an even busier background, but I was pleased with the subject isolation and the way that the car filled street has been rendered. You can see everything, and you can see a lot – but you still know what the picture is about

This shot is a SOOC jpeg (in Acros) with a tweaked tone curve in post. I’ve been playing further with it from the RAW, but I do like this shot as it stands. This was taken on the very first afternoon that I collected the XF56 APD. This street performer isn’t daft – this street is actually heaving with people!! I had the camera set to manual focus (like I normally do) and I was looking for things to shoot with “my” (sic) new lens like a kid with his pocket money in a sweet shop! The crowds momentarily got out of my shot, I hit the button for back button focus, rocked back and forth a bit until I was happy with what the focus peaking was telling me was in focus, and this is what I got. Like or hate it – it’s in focus at least!! 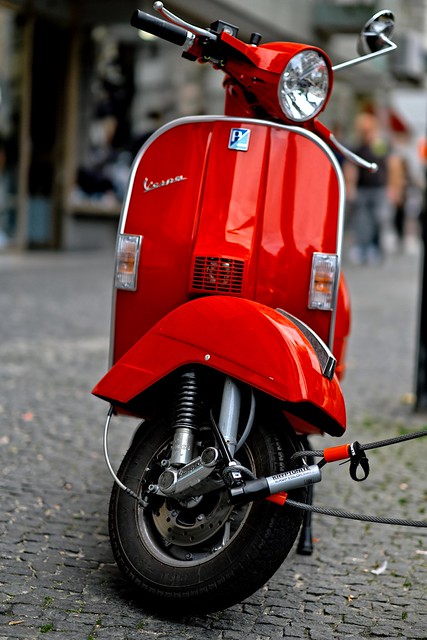 This was taken on day 2 or 3 with the lens.. The framing’s a bit tight, but I wanted the scooter to fully fill the frame. I’m pleased with how this image is rendered, there’s, to my (and others who’ve commented on it) eye at least, a real 3D pop to this shot 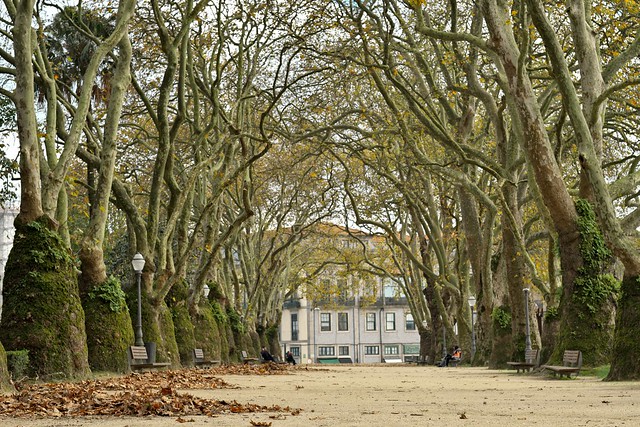 The Forest in the City

This is actually taken at F5.6, as I said in part one – you can’t just shoot everything wide open. So technically this shouldn’t look any different to the regular 56 (as the APD filter light obscuration ceases by this aperture). But of course that’s still an extra piece of glass in the lens (which the regular 56 doesn’t have), and I feel this shot still exhibits a pleasing spread of contrast. 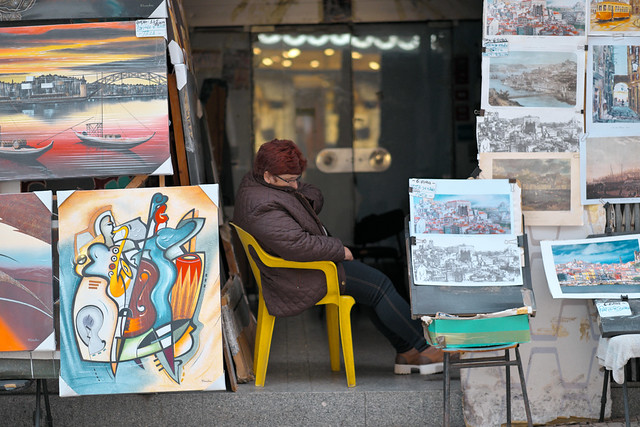 I wanted to try this lens for street… and whereas I’d be the first to admit that a couple standing and chatting, a man posing as a statue and a street vendor having a snooze are hardly dynamic subjects (!!) equally they’re not posed portraits either. I can’t deny – the 56 APD (and regular 56 for that matter) can be hard to use wide open, but it can be done, and in my opinion it’s worth persevering with. 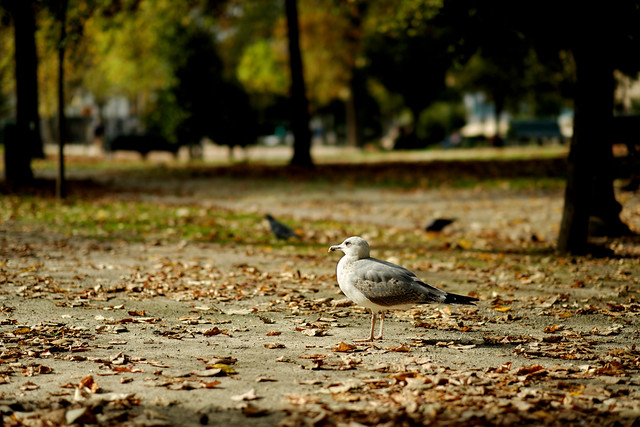 Searching for the Sea

I was drawn to this scene simply because of the light, and the business of the back/fore ground. It certainly shows just how thin the DOF is! I also think it demonstrates the spread of contrast that I hoped to get from the APD. 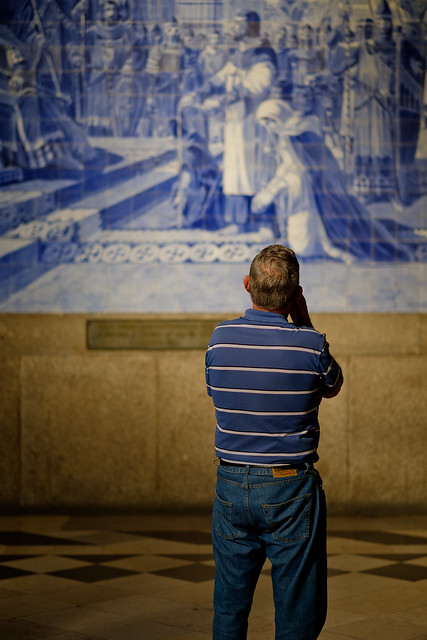 Taken at the Sao Bento railway station, this is a shot from the very first day with the lens. I’m not able to tell how it would’ve looked with the regular 56, but I think that the OOF areas are rendered very nicely – smooth and not jarring to the eye. 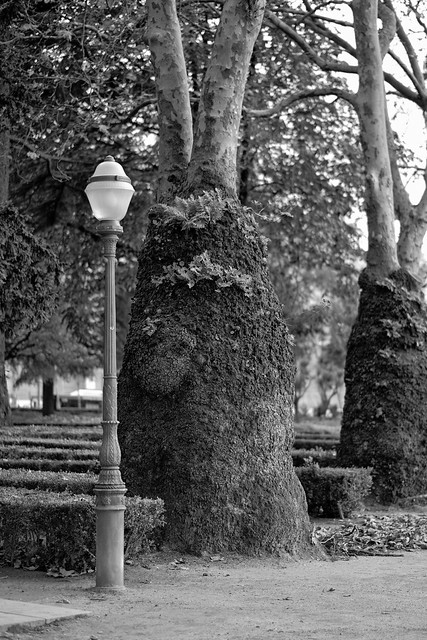 Another SOOC jpeg (in Acros) with a tweaked tone curve in post. I feel this really shows how well this lens copes with little details and textures. 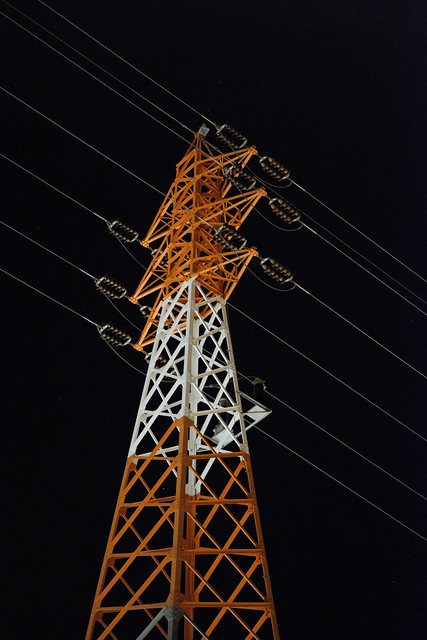 Who’s got the Power

Shot at ISO 12800, while I was bored waiting for the bus! The high ISO performance of the X-Trans III sensor is really pretty good, but in terms of the APD, even from a distance it can make the subject pop.

So, that was my time with the XF56 F1.2R APD. A lens that I’d wanted to try since I first heard about it.

I personally feel that the APD filter does add something to the pictures, the images are somehow a little warmer, not perfectly clinical.

In many ways the rendering remines me of the original 3 XF primes, it has a character – a character that I personally really like.

Regrettably I was NOT able to compare it to the regular 56, I started to arrange this, but Fuji needed the lens back before I could get anything sorted.

I was able to compare it to the XF60, and although (not at all surprisingly) the 56 beat the 60 in just about every department, that old 60 held up pretty well!

But what’s good about the 60, is that it’s sharp, very sharp (not 56 sharp, but still sharp) and that extra 4mm gives a surprising amount more subject compression. But the thing you never seem to read about RE the 60… it has 9 aperture blades (most Fuji lenses have 7, this includes the 56) which mechanically gives a smoother look to the OOF rendering.

It would be wrong of me to say that the 60 is a poor man’s 56 APD. But equally this poor man does actually own the 60 and he’s pretty happy with it.

Like I said, it’s a great shame I never had both 56s to try at the same time…

I was wondering just how “bad” the 56 APD would be on the X-Pro2, after all – the X-Pro2 features a faster AF algorithm and a lot more AF points.

On the whole… The 56 APD sort of made the X-Pro2 feel like the X-Pro1 & the original XF35, with all the FW updates at times (which isn’t all that slow to be fair)

The 56 APD performed APPROXIMATELY as well as the 60 does on the X-Pro2. Namely – if focus is acquired at the first time of asking, it’s pretty snappy… if not, well the lens hunts until it does find focus. Occasionally the 56 APD failed to find focus all together. Face detection was pretty accurate in terms of focus, and overall AF generally delivered in focus images.

Now you may read that and think, ‘oh my, the APD is as slow as the 60’ but let’s quantify that a little…

The 56 APD is moving a shed load more weight in terms of glass elements to achieve focus, and it’s also worth mentioning that (compared to the 60) it’s working with approx. 2 stops less DOF (wide open) whilst doing so.

If you need a fast lens the XF35F2 is very fast, I’d be surprised if the AF difference between the regular 56 and the APD was mind blowing… but that’s just speculation on my part.

For me, I wanted to see if I loved the APD rendering and if I thought it was too slow to be practical.

And I have to say…

No. It wasn’t slow enough to slow me down… but I’m quite slow anyway… my camera generally lives in manual focus (so YMMV)

I found that the APD gave me nicely detailed and contrast rich images, which I liked very much.

I am extremely grateful for the loan of the lens. Thank you Fujifilm Portugal.

But I was also sad to give it back.

July 2017 Since writing this I’ve had a chance to compare the 56 APD to the regular 56R.
You can read this addendum on the following links: Part One ¦ Part Two ¦ Part Three