At the start of the year I shared my intention to experiment with taking street portraits.

In case you missed it, you can read that post here

But for this year I wanted to engage myself with a project that wasn’t focused on the date and the pressure to get a shot, any shot, but instead on the content.

I quickly discovered that the X-Pro2 made a superb street portrait camera, not just the IQ, but the way it didn’t seem to intimidate the subject and in some cases, the actual look of the camera made the subjects want to engage with me and be a part of my project!

As you might imagine… to begin with asking strangers to take their picture is a little unnerving, it’s a little strange, and for me at least, not something that came naturally.

That hasn’t really changed for me. It’s still slightly unnerving to ask people for a shot.

So have I adhered to my project and managed to take any more street portraits?

So here’s a few more shots of the kind people that have let me take their picture. 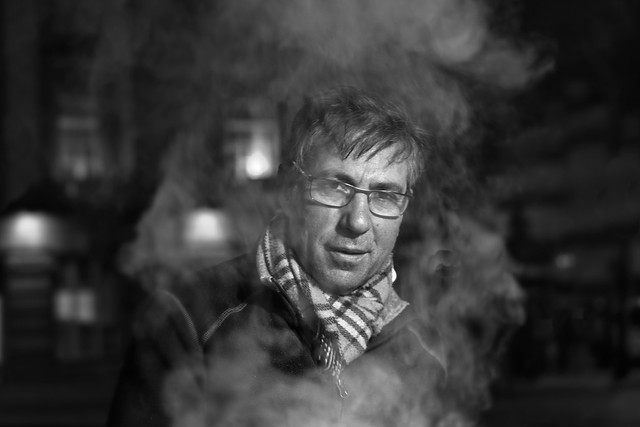 For this night time shot, I approached a street vendor (selling chestnuts) who had 2 companions with him. I directed my request for a picture to all three, hoping that would increase my odds of a ‘yes’

Well 2 of the people couldn’t get away quick enough 🙂 but the chestnut seller was happy for me to continue.

I always show them the shot (on the rear screen) and he seemed to like it.

I originally set out to shoot all my street portraits in colour… A lot is said about monochrome being a better medium for people, and I don’t completely disagree (or completely agree) – but for me, people are colourful and whereas it’s completely true that shooting someone wearing (say) a bright yellow T-Shirt, means that yellow will be a very prominent part of the final image, in my opinion, it’s also true that the yellow T-Shirt is what that person chose to wear, how they chose to look that day, in short the colour of the clothes is part of the ensemble, and I think that’s important.

However for this shot, it was night time, he was wearing quite dark colours and I felt monochrome worked far better. 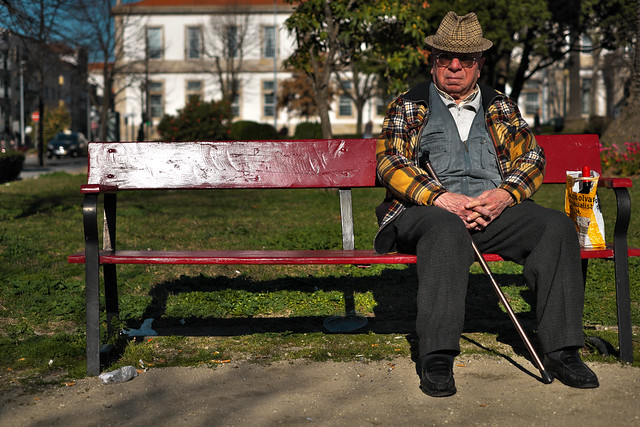 I had already asked a few people in this park for a shot before finding this guy.. they had all said no. This chap saved the moment (so to speak) by being more than happy to sit for a shot! Well he was already sitting, in fact he was a great subject.. didn’t smile, didn’t pose – literally he held the position and facial expression he’d had as I first saw him. Perfect. Because sometimes (and I’m not complaining, honest) they say yes, then start smiling and posing and it’s great that they’re taking it so seriously, and the look and shape they make for a photograph is an interesting and valid thing to capture… but sometimes you just want them to hold the look they had when you first saw them! 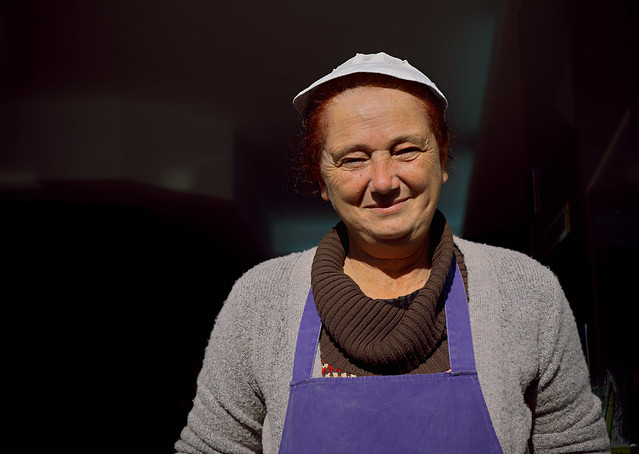 This lady works in a café, standing by the doorway, waiting for the lunch time customers. She had no reservations about a shot, and her smile was warm and kind. I’m glad to have been able to capture her image. 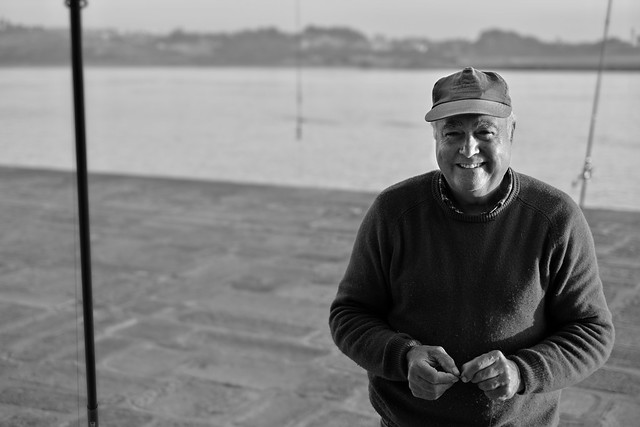 Another one in black and white! This guy is a fisherman, he was just finishing up for the day. He seemed in a good mood… perhaps he caught what he wanted and was therefore happy for me to capture a shot. This might have worked in colour… I had colour in mind at the time… but the golden hour was upon us, his back to the light, his jumper bright red, his face a little ruddy from a day (many days!) outdoors, and the overall look of the shot in colour just had too many distractions. 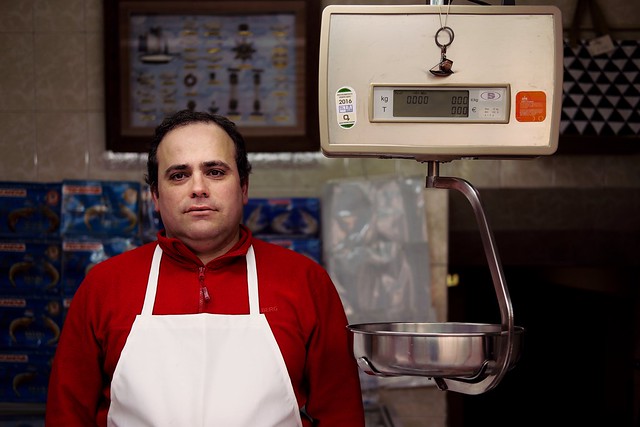 Another guy I was able to shoot whilst at (his) work. I love that he’s not smiling and I was happy to be able to add some context in regards to his job. This chap works at Porto’s main market, and I’ve taken a few shots there of people (it’s a bit of a regular haunt of mine truth be told)

Yes, I’ve been keeping with my 2017 project of street portraits!

When I first wrote about this, I had the opinion:

And I’m left wondering if this is not the true fruit and ‘profit’ of Street Portraiture, sure you get to shoot people in situ, people that catch your eye, people that have interesting faces and are unlikely to smile like an awkward 5 year old; but more than that you get to engage and converse with real people, living their very real lives

And I stand by this. I personally believe that image making is a very humanistic endeavour… from early humans painting on cave walls, to those fabulous paintings of historical figures and bygone scenes that you find in galleries thorough the world, we seem to want to record what we see.

What I’m finding with street portraits is that not only do I get too capture a moment, but when I engage with a stranger, I get to live a brief moment too.

If you’ve ever considered street portraits, but where afraid to ask, afraid to try – then I can only suggest that you take a little tentative step and give it a whirl.

After all, as I wrote before: